www.JazHarpRecords.com With the release of her eighth CD “After Hours”, which is now rising rapidly on the jazz charts and on the 2008 Grammy nomination roster for Best Contemporary CD, Lori Andrews continues to push the boundaries of what the harp can do, bridging the gap between traditionalism and contemporary jazz. Having distribution in Japan (Kanzen Records) and recently obtained distribution in Germany, Austria and Switzerland (Laika Records) she has become a mainstay of the festival circuit – wowing audiences worldwide with performances and interviews. A past winner of the Jazziz Readers poll as best jazz harpist, Lori and her quartet have been featured at the Playboy Jazz Festival, Long Beach Jazz Festival, and Sacramento Jazz Festival as well as performing for presidents Clinton and Ford and the king and queen of Spain. Lori’s unique style has been heard for years with artists such as Luther Vandross, Gerald Levert, Mary J. Blige, Ruben Studdard, Michael Paulo, Mary Mary and Sygnature. When most people think about a harp, they think of music that’s heavenly and classical. Lori Andrews has shattered that notion as she has become one of the best jazz harpists in the world. Lori’s moto? “Harp’s not just for breakfast anymore!” QUOTES….. “If you think you’ve heard it all, check out Lori Andrews, who single-handedly, no . . . double-handedly, redefines the possibilities of the harp and turns it into a funky jazz instrument. Incredible! She’s the rhythm, the bass, the melody, all intertwined in a way that you just have to see and hear to believe. Lori’s music is creating a new future for an instrument rich in history and . . . she makes it swing!” – Bob James “One of the experts in contemporary jazz, waiting to be discovered in a big way.” – Lee Ritenour “The harp is a unique fixture in the world of improvised or ‘jazz’ music. My first exposure to the artistry of Lori Andrews revealed the distinct virtues of this instrument in the hands of someone who understands its dynamics. Lori demonstrated the capacity of someone who can set the pace for the harp in the very challenging world of ‘jazz’ improvisation.” – Hubert Laws “Damn, Girl. . . . . you must have flunked harp school !!!” -Marcus Miller “I hear what you’re doing….and I really dig it!!!” -Frank Sinatra “I can’t believe a harp can be played like that. Very adventurous material! You play the harp with exceptional ryhthmic accuracy and your harmonic approach is very challenging and uncharacteristic for the harp – very, very cool!” – Harvey Mason (2003) “Saw a rerun of the ‘Instrumental Women of Jazz’ performance at the Ford Amphitheatre and you were fantastic. I really enjoyed your playing and stage persona. Let’s look for some opportunities to do something together.. Continues success..!! All the best.” – Harvey Mason (email….2005) “Lori Andrews is a true rarity . . . a jazz harpist! She consistently shows that her delicate instrument can be used to produced swinging, soulful, funky and stomping music, and she always puts on an entertaining and very musical show. She certainly changes one’s image of a harpist – catch her whenever you can!” – Scott Yanow -Jazz Editor, The All Music Guide to Jazz 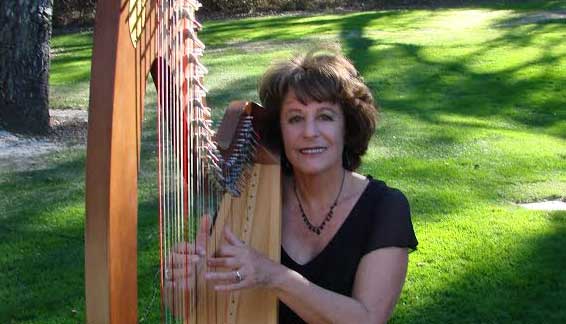